Building an Escape The Room Business

By the time we opened Hour to Midnight-Room Escape Games in May of 2016, we had hoped we would already be running three out of our four planned escape the room games. However, this is not the case. My business partner and I both have day jobs, and while we are used to working hard, nothing had prepared us for what was in store for us in creating Hour to Midnight - Room Escape Games in beautiful Portland, Oregon. Before I get too deep into what happened, and why I'm saying all this, let me flash back to my childhood and tell you a little story....

I grew up with a joy of Halloween, I loved making haunted houses for my friends and family to explore. I built all sorts of crazy things, most of which were fairly low-tech, and not really anything special (especially with today's standards). Over the years of my childhood and early teens, I started helping out with other local haunted houses and creating slightly better original ones for local charities. Fast forward to 2004 when I designed and built my first major haunted house at a major venue at Jantzen Beach, and met my now business partner, Ed Wolf. We found we worked well together and formed a company called FrightFX LLC.

FrightFX was a special effect, costuming, and set design company for themed environments, theatre, and film. The company did very well running one of the highest rated haunted houses in Portland for several years being hosted in Portland's Moda Center inside FrightTown. At that time we felt FrightFX needed to branch out on its own and hopefully grow. This didn't happen... things just sort of died. We had some minor film and set design gigs, but our true passion was themed environments with every aspect of that theme being tweaked just perfectly (sets, sound, lights, and even atmosphere). So in order to keep our company afloat, we realized we had to do something to not only get back to our roots but make sure we could support the storage fees of our 5 semi-truck trailers worth of props and animatronics.

The Secrets of Nibiru (Our First Game).

We decided the best thing to do was to revisit an idea we had 7 years ago while working at our haunted house venue. We had planned to make a space that contained several rooms each containing a puzzle. Once the puzzle was solved, the team would advance to the next room and so on, and so on. Upon completion, they would win some sort of prize, but they would be required to pay for re-entry each time if they didn't make it all the way through. This model didn't work so well for the haunted house venue and was scrapped.

Fast forward to 2015, we started hearing the buzz about Live-Action Escape Room Games, and realized this is what we were trying to create all along! We got to work creating our first game in the shop at my home. Since we already had props and wall panels from our haunted house, the initial room layout came together rather quickly. We had a working prototype in a few weeks thanks to the room escape game I had designed online several years earlier. We put our knowledge of electronic wizardry to the test. There are differences between what you can do on a computer game and what you can do in real life, but with our special effects backgrounds, we have ways of blurring those lines to the point you may be left scratching your head wondering how we did it.

We invited friends over and set them loose in the escape room. Most finished early, some embarrassingly early, so we knew we needed more puzzles in order to make the game last the full hour. We came up with some new ones and tweaked a few existing ones to make them more involved. We did more tests, and then more until we felt we had a good mix of puzzles for all group sizes we tested. Our escape room times were averaging about 50-70 minutes. We thought we had it dialed in pretty well and began the quest for a building.

We knew after looking for buildings for our haunted house, that unless you are willing to sign a lengthy lease, aren't at all picky, and are a huge chain store you won't be finding a large space, so we started small. We found spaces around 800 square feet, which would be perfect for one room and a lobby. Most of the places we found were priced extremely high and just didn't make sense to us. At the same time, we were searching for a building we were meeting with the city to find out what would need to be done with the space in order to open our doors, more on this later.

After searching place after place, we were really getting discouraged, it's as if the realtors of Portland are against leasing the spaces they represent. Then we stumbled upon an old Radio Shack building on 115th and NE Halsey (On the East side of Portland). It was large, but the price was great, especially considering the costs of the other high priced smaller places we viewed. We signed the lease and began the long and grueling process with the city. I'm not going to go into details, but 8 months later we were ready to build. We hired contractor after contractor but tried to do as much of the work as we were legally allowed to.

In the haunt industry, there is a term called "haunt tired", it is when you build an 8,000 square foot haunted house in one month's time while also attending your day job, running the haunted house for a month, and then tearing it all down and packing it away in 10 days. We were used to that hectic time frame and thought now we have enough room for four escape rooms, and the whole building is less than half the size of one of our haunted houses, we will be open in a month...

Oh Boy, Were We Wrong!

We went into this build mentally drained from dealing with the city. In addition, all the work on gutting the place, getting the walls up with our contractor, and all the other small things you just can't anticipate when building something like this; only to finally pass final inspection several months later, and beyond "haunt tired". Now it was finally time to bring in the escape room from my shop do a few minor tweaks and open up our doors to the public.

More building, problems, bugs, more building, more bugs. We would fix one thing only to have something that was working perfectly the day before sudden fail. If I believed in curses, I'd say someone had it out for us. But we pressed on. Now with our brains even more exhausted, our bodies passed the point where we should be in a coma, we were finally able to open our doors one year after signing the lease. We nervously awaited the reactions from our first official customers. We knew that we had beta tested our room, and the responses from the testers were amazing, so we weren't too worried. But the night before, during our final beta test, the computer we had running the whole show crashed. We only had one day to get the hard drive restored, files transferred, and settings adjusted to the new parameters. So this was a special kind of nervous.

Not only did the game go off without a hitch, but the players came out with glowing praise. We did it, we had our room running, and it was great! Now easy street, we can sit back, let the money roll in and rest up running games until we become "not haunt tired". Wrong again bucko! marketing, glitches, signage, the desire to get the second room open so we can afford to keep the doors open. All that fun stuff that goes along with being a business owner, and oh yeah, still doing our day jobs. And just because we enjoy punishing ourselves, we also built wall panels for our third game "The Pharaoh's Curse".  This would be our first multi-room escape game and the one we are the most excited to build.

So no rest for the weary.... back at the grind. We began the whole process of design and build a second time. This time, unfortunately, the design wasn't as far along nor 75% complete in a shop space.

This Escape room game, as many of you well know has been in its build phase for a long time, too long. It's been about 10 months since we opened, and since October of 2016, we have been telling people it will be ready in about a month. Well, we would like to say it is done now, but at the time of writing this blog, it is still in its build phase. We are however very close to being done, and starting the Alpha testing portion of the process (first very rough run through of the puzzles and story). Well now you are caught up to where we are currently, and a lot of the blood sweat and tears have been left out to spare you the gory details but we are still happy, still healthy (mostly), still "haunt tired", and still plugging away at it. "The Secrets of Nibiru" is still going strong with no signs of slowing and getting excellent reviews. We look forward to opening "The Assassin's Deadly Game" for all of you lovely people soon, and hoping we carry on the tradition of quality high-immersion games that Hour to Midnight - Room Escape Games is known for.

Special mention to those who have helped us with our build out, without you, we wouldn't be where we are today: Allen Fertuna, Eric West, Genevieve West, James Sharinghousen, Ken Webster, Melissa Steinman, Renee Malchart, Ryan Wells, Sue Wolf, Tommy Bently, Walter McGarvin, and of course all our wonderful Beta Testers! 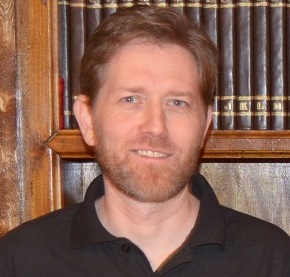 Thomas Johnson is co-owner of Hour to Midnight - Room Escape Games, FrightFX LLC, and holds down a day job doing computer aided drafting for a local engineering firm. He has a love of theatre, spooky things, and art.