From the Hour to Midnight Team

Hour To Midnight has a few teams of experienced Room Escape enthusiasts.  Here we want to share some of our team’s plans and ideas when going to an escape room.

The Three Phases of a Room Escape game:

Hunter/Gatherer information collection. As you enter the escape room you are wanting to gather as much information, objects, and puzzle locations as you can.  Communicating the whole time.  You may be able to progress to the next step at any point. But you may also have some of your team who specializes in Hunter/Gatherer phase and continue to do that while others move on to the next phase.

Sort and assemble. Here is where your OCD (CDO if you don’t mind) come into play.  Some members of the team who like to organize and consolidate information will shine in this part of the game.  They will put puzzle parts together (not working the puzzle but gathering the parts to them)  they will be able to call out what is missing to the Hunter/Gatherers and begin a coordinated process for refining the items/information gathered.

Solve and resolve phase. Here are your puzzle people, they can take what is gathered, what's been organized and start working the puzzle.  They will want lots of help from those who enjoy the other phases of the game as they will want to focus more on the puzzle than the room. Keep these guys busy as they are the ones who will get you out of the room. But don’t distract them, let them focus and lend assistance when you can.

Why Room Escape Games are so great for Team Building:

Room escape games are the perfect team building environment.  So we capitalize on some of the basics of teamwork.

Communication. This is key to any good team.  What our team does as we move about the room we say out loud what we are finding and/or are looking for.  While the rest of the team is also looking about the room and vocalizing their finds and needs.  This method helps everyone understand what is all available in the room and what things are needed where.  If your team can do this well, you will find your escape times will get better and better.

Each person gets a shot at the puzzle.  If one person or a small portion of the team is working on the puzzle and are not progressing we will ask that they swap out with other teammates who want to give it a shot.  This allows for more ideas to be put onto the puzzle.  If a team is making progress the rest of us will move onto other things around the room.  There will be time to talk about the puzzles afterward when we are sitting around enjoying the retroflection of our escape.

Don’t pass bad information. While communication is, great sometimes is can also be bad.  If a pair of people are working on a puzzle and they get stuck we “try” (with little success, because this is really hard) to not tell the next group what we are doing correct or incorrect.  Instead, we give them the hints and information we found and then just walk away with our ideas kept to ourselves.  Obviously, if we had the right idea we would have solved it.  So we let the next portion of our team come in with new ideas and attempt the puzzle.  If they get stuck we will go back and work with them and maybe a third idea will come out of our two original thoughts.

An Example of Why We Do This Now:  I found all the clues to a padlock.  The combination was SMART  so I put the combination in and the lock wouldn’t open, so I asked another teammate to come help.  I told them, “I tried smart and it won’t open”, and I left.  Guess what they did?  Yeah, they entered everything but SMART into the lock, figuring I already did it and it was wrong.  They didn’t open the lock and got another person.  They told them, “SMART doesn’t work, give it a try”, and walked away.  That person also did all the other 5 letter names we could find except SMART because we already tried that.  Well, 15 minutes later the game master tells us “Uh, smart is the correct combination, you just need to turn the lock”.  DOH! So if I wouldn't have given my team bad information we might have been out 15 minutes earlier.

Avoid hive mind. You are a team, which is great, so spread out and use every member. Don’t all gather around one puzzle and watch one or two people work it while telling them how to do it differently. Trust that they will work on it until stuck.  When they are stuck, they should ask for another part of the team to try.

Avoid over complication. Most room escape games you find will have some logical process you do to solve a puzzle or to unlock the door.  Don’t over analyze things and get stuck on abstract thinking too much.  While it is good to think outside the box,  most rooms are made so anyone can work it.  Step back or move on if you are making it too complicated.

Know when to get a hint. As an owner/operator and enthusiast, I see many groups get stuck and refuse to get a hint.  If your team spends more than 5 minutes on a puzzle and everyone, is stuck it's time to get a hint.  Hints are available for a reason, sometimes we just don’t get what is going on and need a nudge.  Some escape rooms give you hints via actors or radio even when you didn’t ask.  Others still only give hints upon request,  it is usually a good idea to let the operator give you a hint rather than ask for a specific hint.  They usually know the room fairly well and know where you are and what you're stuck on.

Double check. When looking around the escape room in the hunter/gatherer phase do not trust someone who says, “I already looked there”.  Go look again.  When looking, be sure to find all the dust bunnies and small little niches that are hidden around, sometimes you will be surprised to find something in a place two or three others already searched.

Listen closely. Game designers are tricky people.  Listen closely when they give you the rules and even just standard chit chat may have a clue to the room or how they think.  The more knowledge you gain before going into the escape room the better.  If you know that the game designer is a history buff you may want to focus more on those types of things or dates.  When I give instructions to the game I always try to sneak in a sly this or that just to see if people catch it or not.  Even our game introduction has some helpful hints in it that very few people catch.  We even have a few easter eggs built into the rooms that have nothing to do with the game but are links to other things about us personally, professionally, or regionally.

Party after the game. Having a drink or two, or other recreational mind adjustments, may not be a good idea prior to the game.  These are brain games, having your full mental capacity is a good idea.  Save the party for the recap and celebration after your escape.

Organization. My team likes to organize, well I like to organize and they don’t mind it. We do think it helps if things are organized into a few categories.

Working on. These are things we think we can solve now,  all the related objects are put together in a pile on a work surface and a few of us will start digging in.

Needs work/missing parts. Puzzles we don’t think we have all the parts and pieces for or are lacking information on.  Usually, have a couple of our more abstract thinkers working on this pile so we make sure we don’t miss something.

Done/discard pile. Typically with room escape games objects are only used once per puzzle or you get information from it once.  So we create a discard pile and make sure everyone knows where it is.  If we do need an object again we know exactly where it is,  the discard pile. This also prevents everyone from finding the same items over and over again leading to more wasted time.

May find things early you don’t need till later. You may find objects and even complete puzzle sections that are not needed until later in the game,  its ok to set something aside and move on,  be sure to revisit it and check to see if it can be used yet.

Red herrings. Do not be too quick to dismiss something as a red herring, and don’t be so overconfident that something isn’t.  Let your mind be fluid,  if something doesn’t fit, let it go.  Some puzzle designers put distractions and red herrings into the design of the room, others don’t.  It is hard to tell what is part of the puzzle or just part of the room until you work through what you have. Puzzles tend to be more straight-forward, and having to piece together random bits of information for a code or answer probably isn’t the proper way to solve it. 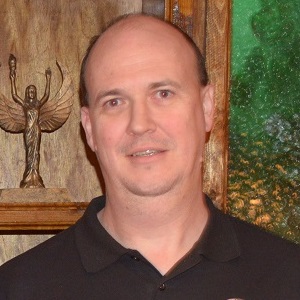 Ed Wolf one of the many team members in FrightFX LLC, who has brought forth a new and fun world or immersive room escape games.